The biggest problem BattleScribe users face is getting hold of data files. I'm sure many of you have had problems finding the files you need to get up and running, and I'd bet money that many more gave up using BattleScribe because they couldn't find any files to get started in the first place.

The data repository system that was added a while back has helped a lot - there's no more copy/pasting of files and BattleScribe can now automatically update your files when new ones are available. Which is pretty sweet (even if I do say so myself).

Thing is, this doesn't really solve the problem of finding a repository in the first place. To that end (as suggested by Scarletsquig), I've added a data files forum so you can let people know about the files you've created and the repositories you're hosting. If you've spent time and effort creating an awesome set of files, it'd be great if you felt like sharing them with the rest of the community!

Feel free to use the forum to:
There is of course The One Rule: No Games Workshop. Sorry about that, but I've already got myself into trouble with that one...
Posted by Jonskichov at 22:31:00

So, it turns out that the fix in the last version that prevented BattleScribe from crashing when returning to the app after doing something else, had... side effects. In some cases, particularly when using a certain Grey Knights catalogue, you would get a crash when trying to edit a unit you'd added to your roster. It was a weird error and there wasn't much information about it out there on the 'net. After some sleuthing however, I uncovered the problem. Settle down while I tell you a story...

Android apps need to store the data that you're currently working on when you leave the app, so when you come back the data can be restored and you can continue from where you left off. The original crash when returning to the app was caused because BattleScribe wasn't saving any data and therefore there wasn't anything to restore when you came back, resulting in a force close. So to fix this issue, I saved the roster, catalogue and game system data when you left the app, and restored it when you returned. Fair enough you might say.

The problem is, the BattleScribe data files can be rather large and complex (for a phone to handle anyway). The Grey Knights catalogue in question is one of the best put together and most complete catalogues out there. It's also the biggest I know of. It turns out that the Grey Knight data was in fact too big! So big in fact that the app would run out of space and crash when trying to save the data for later!

So unfortunately the solution to this (for the time being at least) is to remove this fix and no longer save data when you leave the app. It will go back to crashing if you return to it after some time away. I do have some ideas on how to fix this for good, but it will take some time and I wanted to fix this as quickly as I could. For now at least I think it is better to get people going again and make sure that all those Grey Knights players out there can create lists.

I hope this post isn't too techie, and explains a bit why this fix had to be removed. As the Tau would say, it's for the Greater Good.
Posted by Jonskichov at 22:37:00

It's been a little bit of a rocky start for the rebuilt Android version of BattleScribe. I guess it's to be expected when you start from a clean slate, but I don't like to have worked to make a better user experience, only to inflict everyone with all new bugs. With this latest update, however, I think we're back on track.

Over the last week (in between a nasty cold), I think I've resolved pretty much all the major issues people were having. Particularly, there were a couple of force closes that needed fixing, and performance issues as it over-aggressively checked file formats. I've also managed to squeeze in a couple of new features and tweaks, and (finally) fixed a force close that occurred when returning to the app after doing something else.

So, if you tried BattleScribe on your Android before and found it too slow, buggy or crashy, now's the time to give it another go - it's free after all ;) On top of that, as a bit of an apology for the problems over the last week, I'm going to leave BattleScribe Mobile Pro at 99p for another week.

P.S. I'm working on getting it into the Amazon app store at the moment for the Kindle people out there. Unfortunately their approval process is a little... slow.

[Update:] After a some feedback it turns out there was a real facepalm of a bug in the last release that prevented adding/removing via the +/- dialog in some cases. Also there was a little outcry over removing landscape orientation on some of the screens. I've just released a new update that should fix both of these issues. Enjoy :)

After nearly three weeks, I've finished completely rebuilding the Android version of BattleScribe from the ground up. I think it really needed it - the original version wasn't very nice to look at and in some places was pretty poorly put together (it was my first Android app, I was learning!).

This new version is much easier on the eye, with a cleaner interface - hopefully it's easier to figure out what's going on. There are also some new features to help you import data files and share your rosters with others. Other than that, the main screen for editing your roster works pretty much the same as before. I've got some ideas on how to improve this page in the future though, so keep an eye out.

To celebrate, I will be having a sale: BattleScribe Mobile Pro will be just 99p for a week, so get it while it's hot!

I will be adding BattleScribe Mobile to the Amazon app store and others over the coming days if you prefer not to use the Google Market.

Here's some screenshots of the new look (full change list below): 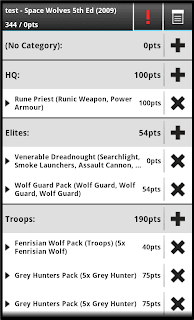 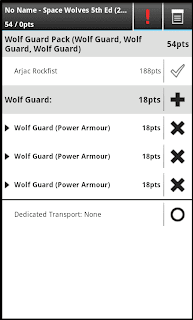